How To Measure Chainsaw Bar – Learn From Experts

The chain on your chainsaw needs to be sharpened to keep it in good condition. However, there comes a time when replacing is inevitable. Replacing a chain saw chain will require you to know how long the chain is as well as the length of the chainsaw bar.

The bar is the part of the chainsaw which the chain wraps around. Getting the length of this part will help you know what size of chain to get. This is especially if your current chain is broken or missing.

Stihl is one of the leading chainsaw manufacturers who made top handle chainsaw to various kind of chainsaw around and most chainsaws in use today are Stihl products. Now let us look at how to measure chainsaw bar length.

When it comes to the bar there are two measurements you need to be aware of, the cutting length and the actual bar length. These two differ by some few inches with the actual length being the longer of the two.

To get the cutting length take a tape measure and measure from where the bar goes into the motor housing all the way to the bar’s tip. The result you get if it is a fraction or in a decimal round it to the nearest number.

For example, if you get 15.4 inches take it as 16 inches. The most common cutting bar lengths are 16, 18 and 20 inches. To get the full length of the bar you have to first find the casing holding screws and unscrew them.

This will expose the whole bar. With the bar exposed measure its full length with a tape measure from one end to the other. The result you get should be 2 to 3 inches longer than the cutting length.

Generally, the term chainsaw bar length refers to the overall length of the bar. This length will be important when getting a replacement chain. Another factor that is equally important is the motor cc.

CC refers to a chainsaw’s engine displacement which is measured in cubic centimeters or cc for short. So how does chainsaw bar length vs. cc affect the kind of chain you get? Well, a longer and heavier bar length will require more power.

A 20-inch bar will require more power, than a 16-inch bar. In this regard, it is important to match the length of the bar to the engine cc.

When shopping for a replacement bar, you will want to know the most common chainsaw bar sizes. The most common bar sizes range between 6 inches and 20 inches.

6-inch bars are common in small cheap electric chainsaws. Bigger gasoline powered chainsaws use 20-inch bars. The size of the bar is usually indicated on the bar. New replacement bars usually have these numbers stamped on them.

What Is A Guide Bar On A Chainsaw?

One of the most important parts of a chainsaw is the guide bar. So what is a guide bar on a chainsaw? Different from the bar, the guide bar is the small metallic part that protrudes from the main motor.

The chain rotates around this oval-shaped bar at a steady pace which helps reduce friction. Guide bars are constructed from a variety of strong and lightweight materials. The most common materials used include aluminum and chrome-moly steel.

In terms of size, guide bars vary in size from small ten inch bars to big 59 inch bars. The latter size of bars are used on professional grade chainsaws. The main purpose of guide bars is to reduce the friction of the rotating chain, which improves the life span of the chain.

What Is The Best Chainsaw Bar Length?

So what is the best chainsaw bar length? As mentioned earlier most bars range between 6 and 20 inches in size. 6-inch bars are best suited to small pruning projects.

The one thing to note is that the longer the bar the bigger the cutting diameter. Therefore 20-inch chainsaw bars are suited to cutting medium to large trees. Smaller bars are used for less strenuous work such as pruning.

There are chainsaws that have bars that are longer than 20 inches. These are however best suited to heavy duty professional tasks. In essence, the best chainsaw under 200 or higher priceir length will depend on what you need a chainsaw for.

Another question that I encounter quite often is; are chainsaw chains universal? Chainsaw chains come in different lengths, and designs. The kind of chain used on an electric chainsaw will differ from that of a gasoline powered one. This is despite them having an almost similar appearance and parts.

Gasoline powered chainsaws normally have longer chains as they are predominantly used for cutting bigger tree trunks. Smaller electric powered chainsaws, on the other hand, have shorter chains.

Other aspects of the chain also differ. This includes the thickness of the blades and the distance between them. Referred to as gauge and pitch respectively, these two aspects vary between chainsaws.

In a nutshell, there are no universal chains that can be used on all chainsaws. When choosing a replacement chain it is important to consider this. Different types of chains are suited to different applications.

Chainsaws have a lot of moving parts and some seem small and insignificant. However, every component has a part to play in the proper functioning of a chainsaw. Replacing a chain or even a bar will require you to understand these parts.

Measuring the length of the bar in particular. The bar is a crucial component and no chainsaw can work without it. Also installing a long chain on a short bar can lead to damage or worse an accident.

Thus when shopping for a replacement chain it is important to consider the length of the bar. The length will help you know what size chain to get. 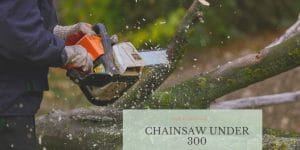 8 Best Miter Saw Stand That Will Ease Your Work